The North East is a great place for comedy and is filled with great comedians. There are enough comedy nights around the North East that an open mic comic could perform almost every night of the week. Add The Stand into the mix, now being open for a few months, and the opportunities for new comedians has never been greater.

The shear number of nights an act can perform at means they can progress at an impressive rate. I went down to Preston this week to perform my 'winners spot' at the Frog and Bucket's Beat the Frog competition, driving Katie Yossarian and Paul Brett to take part in the gong show. Both acts got through unscathed; Katie would have done a 10 minute set if they had let her and Paul bagged second place. The winner was North East based Rob Gilroy, topping off what was already an excellent night.

Last weekend saw the quarter finals for the Laughing Horse New Act of the Year competition held in Newcastle. Howard Lee, Jonathan Pelham, Nick Cranston and Biscuitz all got through to the semi finals, I will be surprised if one of them doesn't go through to win it!

Both these nights showed off a lot of talent from new acts in the North East, some who have been going for a couple of years and many who are in their first year of comedy, all of which will keep on getting better as they continue to gain experience from the growing comedy scene that surrounds them.

Me, Interval, then Frankie Boyle.

The following is a long lost blog post, originally writen on the 18th October 2011.
I've done a spot of traveling over the past 2 months. At the start of September I went down to London to perform Downstairs at The Kings Head. It was a great gig with a full room of people up for comedy, but I tell you 2 days worth of traveling is a lot for 5 minutes stage time. Got the coach down and back and stayed in Witham with my friend Chloe (who definitely helped make all the traveling bearable) so between 2 coaches, 2 trains and 3 tube journeys I was traveling over 17 hours in 2 days. The 5 minutes were excellent though. I had booked it about 5 months previous with the aim of doing a gig in London, I came home feeling it was worth it. 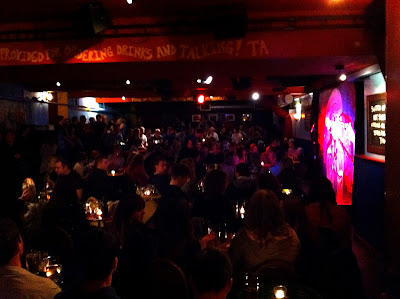 I have just done 2 nights at The Stand in Scotland, last night in Edinburgh, tonight in Glasgow (writing this on a train from Glasgow to Edinburgh to get the train back to Newcastle at 5:40am, good times). The gigs were amazing, both of them, but Glasgow especially. At a guess I'd say 200 people packed into the room all of them wanting to laugh. My 10 minute set both nights went excellent (only 5 hours on trains over 2 days for 20 minutes stage time, so much better!). To top the night off we had Frankie Boyle closing the Glasgow show, quite a nice surprise! The lineup went me, interval, then Frankie Boyle. Crazy.

I've spent the 2 days with Jack Gardner who was also a nice surprise to find in the lineups! We've had quite the epic time hanging out, writing, analysing and performing together the last 2 days. Much like my friend Chloe did in London, even if the gigs were terrible the company would have made it worth it. I should mention again the gigs were amazing, tonight is probably the best room I've played.

I have a 4 hour window in Edinburgh to get some sleep, I feel my usual post gig high may hinder this. Work tomorrow could be fun.
Posted by Graham Oakes at 17:44 8 comments: