Nothing Short of Genius.

Last night I went to the Quack Quack Comedy Club and what an amazing night of comedy it was, if not the best I have experienced in a long time. The overall calibre of the night was tremendous and was made extra special for me due to the mind blowing progression I was witnessing in some of the acts. 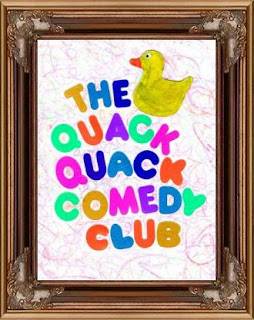 Rich Pullen was MC for the night and did a smashing job. Had he not mentioned half way through the night it was his first time as MC I would never have know, he pulled it off with effortless confidence and quality. The night was a good night for seeing regular acts try out new material. James Christopher brought out new and old material and even managed to make the lighting hilarious. He never ceases to entertain and it was obvious as one of the more experienced acts of the night that he knew exactly what was working and how to play with it. Last night was the first time I have seen Phil Harker (although I'm sure I have seen him somewhere before, just not sure where). He performed a very energetic set with my personal highlight being when he forgot a punchline and I helped him out despite never seeing him before. We highfived.
Phil Golder is a joy to watch time and again because every time I see him he has something new and he just seems to keep on getting better. He performed on the same night as my very first gig and lets just say if you were to compare the performance I saw that night to what I saw last night you would think he was a completely different person. The largest laugh out loud moments from his set were very simple ideas that were executed to great effect in a way I think only Phil would be able to pull off. Talking of people who could only pull their style of comedy off, Jack Gardner finished the night in a way only he can. He also presented me with a moment I have been longing for; the chance to stroke Betty Blue Eyes, well, almost. He is always one of my favourite acts to watch because you honestly never know what he is going to come out with next.

The stand out performance of the night actually blew me away and has placed this man as my current favourite new act in the North East. His name is Andy Clark and he basically represents my long lost comedy twin. One week before I did my very first comedy gig I went to see a new act night run by the Grinning Idiot, this is the night I talk about in my second ever blog post (The Start Begins Soon. June 2010). The man I talk about having a conversation with on the metro is Andy Clark. I saw his first gig 6 days before my first gig and I haven't seen him since. His performance last night was nothing short of genius and I made sure I told him this afterwards. There are few acts that can leave you with such an impression that when you think of one of their punch lines you start laughing again. He had the audience in uproar straight from the get go and never let down. At points I was still laughing at his previous joke to then start laughing at his next. When we were talking afterwards I told him that a common trait of new acts is to find a funny idea and develop that idea into a singular punchline but what Andy did was punch you in the face multiple times. I'm still smiling the day after.

Note: The orange is not Andy. You know what I mean.
Posted by Graham Oakes at 19:17