First (and second) appearance on a Grinning Idiot stage.

So I wrote this blog over a week ago (it’s been Christmas, busy busy) and it’s about events that happened over 3 weeks ago (I went on holiday straight after, lazy lazy) so like they say, better late than never! Happy New Year every one! (That might literally be read by one, I have no idea who reads this)

Me and my friend Laura had plans to see Norman Lovett (from Red Dwarf fame) and Isy Suttie at the playhouse, but due to the snow the playhouse postponed the show because of staffing issues (which they predicted 2 days in advance, not trying hard enough I say). I had told Dan that I was planning on going when I saw him at Long Live Comedy, so when the night was cancelled he got in touch with me.

Dan asked me if I would like to do a 5 minute set, telling me that they were running a different line up (I'm guessing the original acts either couldn't make it or dropped out) with new local acts making up the middle section. I jumped at the opportunity.

The Grinning Idiot is the leading comedy club in (in my eyes at least) so the fact they wanted me to even do a set was exciting. The first gig was on the Friday night (December 3rd) at the Corner House and as luck (possibly bad luck) would have it Simon Donald was stuck in for the night and agreed to headline the show.

﻿
﻿ ﻿ ﻿ So to start off the night we had Dan Willis (interesting to see outside of his MC role) followed by Simon Donald as his first character (hilarious!) then in the middle section we had myself, Nicola Jane Mantalios-Lovett and an act I cannot remember the name of (it’s been a couple of weeks, I want to call him Alvin)
George Zach also made an appearance briefly but most of his time in the limelight came from the constant abuse from John Smith (the MC for the night). The night finished with Simon Donald as Barry Twyford (apparently trying out new material and again hilarious, struggling to keep a straight face himself)

My 5 minutes went amazing (5 minutes 40 seconds, I was relying on Dan keeping time). With over 100 people in the room it was my biggest audience yet. Me and Laura had to run out during the raffle (Simon had brought a single book) but we missed our metro anyway (is this a blog or a story?).

The second gig was on the Saturday Night at St Dominic's in Byker. The line up went Paddy Lennox to start, myself opening the middle followed by Natalie and Andy Fury, then Dan Willis closing the night. My set was good, but not like the night before. It got big laughs in most of the right places, they even laughed at a line that wasn't meant to be funny, but for parts at the start I got silence which I have never experienced. It wasn't a bad gig, I've heard stories of bad gigs, this was just a quiet audience. Even the MC found it difficult, as did the other acts, so I wasn't alone. I learnt a lot from this night: don't be put off by the bright lights (I don't remember looking up as often) and if especially nervous don't rush it (it's my most panicked set to date). Friday went brilliant but it's Saturdays set I wish I could watch back.

They were both 2 invaluable nights which I massively enjoyed. To get asked to perform by the Grinning Idiot, even for 5 minutes, fills me with confidence that I am on the right track.
Here’s to a splendid 2011!
Posted by Graham Oakes at 19:22 3 comments:

When one gig falls...

When one gig gets cancelled, another one pops up. Thats what seems to have happened these past two weeks. 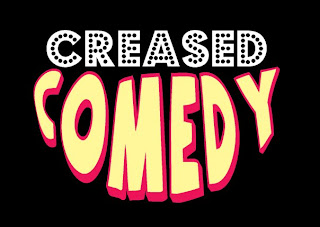 Last Thursday I was down to do a gig at the Trent House, but that is a confusing story. Basically it's not going ahead quite yet. After learning that gig had fallen through however I got contacted by the owner of Creased Comedy, Simon Buglass, asking if I would like to do a middle slot on the Friday night (Simon used to MC the Trent House but in this instance that is completely unrelated). As I am now going to as much comedy as I possibly can, I was already going to the gig anyway, so it was a no brainer on my part. I was originally going becasue Jason Cook was perfroming (who I see year on year and would recommend to anyone!), but I believe he was double booked and so Andy Fury (who was the MC from the new act night I talked about in my second blog post) filled the spot. The MC of this night was John Smith. I opened the middle section, followed by my friends in comedy Rory McAlpine and George Zach (it was a proffesional night with new acts in the middle).

The show was due to start at 9, but by 8.30 there were only 2 people in the audience. There was heavy snow outside so it was understandable that people were not rushing to watch comedy (in a room which unfortunately was going through a period of broken heating). But by 9.15 we nearly had 20 people, a small crowd but enthusiastic, a great crowd to have, well done crowd. Tried out my newest additions for the second time with good reactions from the audience, did 8 or 9 minutes I would say. Was very pleased with the night. Steffen Peddie rounded out what was a great night of comedy.

I was due to do another gig tonight at The Comedy Pig (or "The Pig Night" as the flyer said haha) at Barkollo but no one turned up (I would imagine due to the insane snow). Luckily I was told it was off before I set off (as I was going for the later part of the evening due to a chinese meal I was attending). I arrived home from my meal to find an invite to do a 5 minute slot on Friday at the Corner House. The snow has cancelled a gig I was going to attend at the Playhouse but has given me another gig in return! When one gig falls another rises, I'm telling you.
Posted by Graham Oakes at 02:19 1 comment:

Me performing at Long Live Comedy (Why video yourself?)

This is a video of me performing at Long Live Comedy on the 12th October. My Dad said that putting my material online might effect people coming to see me live because they have already seen it, to which I pointed out he was massively overestimating how many people were going to watch the video. He accepted my point.

Why video yourself doing stand up? It helps enormously. It allows you to see what the audience sees. It allows you to see how you are standing, where you are looking and how you are perceived. It allows you to hear what you said, when people laughed and when people didn't laugh. These are all things that are impossible to imagine after a gig. When I am performing I find it hard to recall afterwards which parts were the funniest and which parts were least funny (however you always know if something dies) so being able to watch it back is an invaluable tool. I was able to learn a lot from watching the video of my first gig and I have learnt a lot from this video as well. There is no need to video every gig, but I feel it is useful if you are trying out new material.

Why put the video online? At the end of the day the vast majority of my closest friends have seen me perform already. I do not expect all my other friends to go out of their way to see me live, but I would still like them to see what I am doing. Plus a small majority of people want to come and watch me but can't make it, so these videos are for them as well. I'm a bit too new to have a show reel yet but down the line video is a useful way to show promoters what you can do if they can't see you in person.

In conclusion, videos are great. Enjoy.
Posted by Graham Oakes at 02:08 13 comments: