First for the very first time.

I did a gig last night (gig number 5!) in Sunderland at the new Sordid Squirrel Comedy Club. What an interesting gig it was. I was put on first, not because I wanted to but because I didn't know any better. A number of the more experienced comedians refused (or preferred) to not go first and as it turns out I have realised a good reason for that. Of course when they came to ask me if I wanted to go first I just said 'yeah why not!' thinking that someone had to do it and that it couldn't be that bad. It was educational. 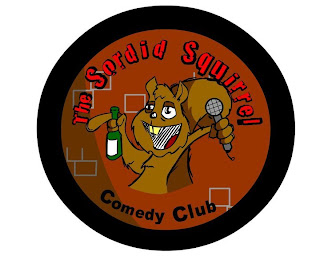 After I had finished George (the Greek comedian who is forever dishing out advice) said to me 'tough gig, but it's not your fault, it's their fault for not wanting to go first'. He then preceded to tell two of the comedians off for letting someone as inexperienced as myself take the first slot. But I am glad I did. I still enjoyed it and it will take a lot more to conjure any feelings of dismay. Granted I didn't get as many consistent laughs as my last 2 gigs, but there were a few laughs and people smiling throughout. It was the first time I have ever found myself actively looking into the audiences eyes, usually I can just look at them generally or just perform into the darkness but in this venue I had all 25-30 of them sitting in a horseshoe right at my feet. I could tell just by looking at some of them that they were not quite ready for comedy, but it might be that my style and my material is just funnier after a few more drinks.

At the end of the day, all the other acts had a reason for not wanting to go first probably because they have had a similar experience, so in that respect I have learnt something valuable which I can take with me as I continue down the ever enlightening path of comedy.
Posted by Graham Oakes at 23:00 2 comments: