Performed another successful gig last night which has gathered me a bit of interest from some very established comedians! Very exciting times indeed.
﻿﻿﻿﻿﻿﻿﻿﻿﻿﻿﻿ 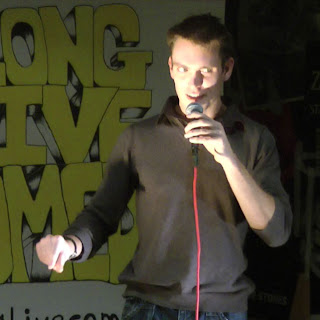 ﻿After the show I got approached by 3 seperate people who all told me that if I was to create a 15-20 minute set of that quality, they would have me perform at one of their nights. As the set stands it is 7 minutes long (I have other material but its not of the same quality) so I need to get writing! One of the comedians was Dan Willis, a co-founder of The Grinning Idiot Comedy Club (he also introduced me to the other co-founder John Smith, who had not seen my set). The fact that he thinks I'm good enough (or potenially good enough, he will of course need to see what I come up with) to grace a Grinning Idiot stage is quite simply fantastic. He advised me to go to the Dog and Parrot (where the Long Live Comedy show is perfromed) every week as sometimes people drop out or they might have a spare slot. His top tip was to just keep gigging (I strongly dislike that word. Any word where 50% of its letters are G is just not right), and that gigin (see what I did there?) is the only way you are going to get anywhere. He has got to where he is by doing thousands of gigs, I have done 4. I have quite a long way to go!
﻿﻿﻿﻿ 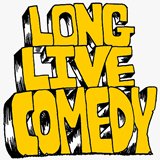 The other comedian to chat to me was George Zach who runs a comedy night at The Three Tuns. He also likened me to comdian Alun Cochrane (who I'll be honest I hadn't come across, but I can see where he is coming from, maybe its the face? Similar smile?)
As George told me after my second gig, the first 100 are just practises. I have 96 practises left. I really need to get a move on!
﻿﻿﻿﻿
As a final thought, the feeling after performing a good set is just phenomenal. And getting the amazing feedback I got last night just compounded it! I was still buzzing (that's right, like a bee) when I woke up this morning. I will quite happily experiance this thousands of times, quite happily indeed.

Long Live Comedy have fantastic acts every tuesday night at the Dog and Parrot. You can find out more at http://longlivecomedy.blogspot.com/